Within the context of CCUS, it is essential to mark a distinction between depleted fields used for storing CO2 and fields that are nearing the end of their life, where CO2 injection is used to help recovering the last quantities of hydrocarbon that are left – this is the process of CO2 EOR.

An afterlife for depleted fields

After more than a century of intensive exploitation, thousands of oil and gas fields come to the end of their production and some of them could make interesting geological storage sites.

The global storage capacities of these reservoirs are estimated to 1 000 billion tons of CO2. Albeit ten times smaller than the capacity of saline Aquifers, oil and gas fields could hold a third of the world emissions for a century.

K12B: CO2 re-injection pilot in a natural gas field in the North Sea

Run in the Dutch North Sea by ProNed (an exploration-production subsidiary of GDF-Suez) since 1987, K12B natural gas field is now depleted. At the start of the exploitation procedure, the CO2 extracted from the natural gas was released into the atmosphere. GDF-Suez, as part of a research study with the Netherlands (ORC project: Offshore Re-injection of CO2), installed a pilot to re-inject the last tons of CO2 extracted into the gas field.

K12B was firstly a local environmental action, but also the chance to test the storage capacities of this reservoir, which would then be hosting CO2 from other platforms. The injection potential of the field has been calculated to 480 000 tons of CO2 per year. 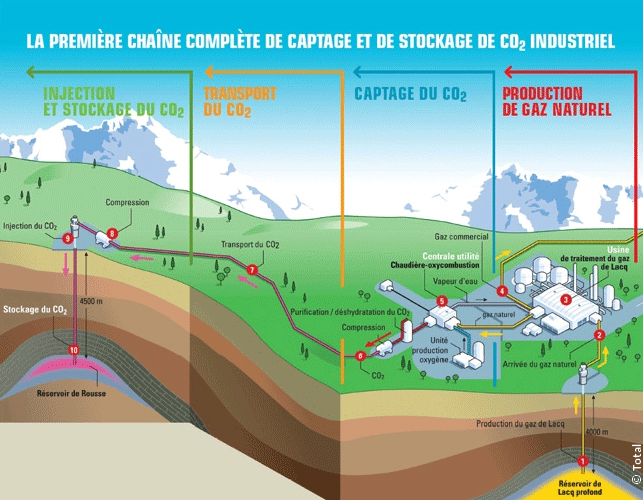 Since January 2010, the gas treatment factory in Lacq (Atlantic Pyrenees) serves as pilot site for injecting CO2 into a depleted natural gas field, located 4 500 meters deep. This project is supposed to last several years, during which the company Total aims to store 120 000 tons of CO2.

The results of the project should help scientists to master the particularities of the CCUS complete chain, procedures and tools for monitoring, as well as completing our knowledge base on the oxycombustion capturing method.

Optimization of fields coming to the end of their life

Since 2000, an operation of enhanced oil recovery (EOR) by CO2 injection was set up at the Weyburn pilot site (Canada). The International Energy Agency (IEA) then launched a research project there, aiming to study CO2 geological storage in an oilfield and examine how to conciliate EOR and long-term storage.

The first phase of the project (2001-2004) already gave results in the areas of modeling and monitoring of CO2 underground, as well as for evaluating performances and risks associated to storage.

The objective of the second phase (2005-2011) was to publish a guidebook on the technical and legal aspects of CO2 storage.