CCUS at a glance

Carbon Capture, Use and Storage (CCUS) consists in trapping CO2 emitted in vast quantities during industrial processes such as power, steel or cement productions, to ultimately store it in subsoil away from atmosphere or re-use it. Once captured, CO2 no longer piles up in atmosphere, and thus plays no part in the greenhouse effect nor climate change.

The CO2 is captured from the industrial smokes of refineries, petrochemical industries, or power plants. For offshore storage, CO2 can be transported via sub-marine pipeline for short distances, or via ship for longer distances (from 500 to 1000km). For onshore storage, it goes through pipelines to eventually be stored – from 800m to 3000m deep or more – into non exploited coal seams, deep saline Aquifers, or oil and natural gas reservoirs coming to the end of their life. © Agence idé for Total 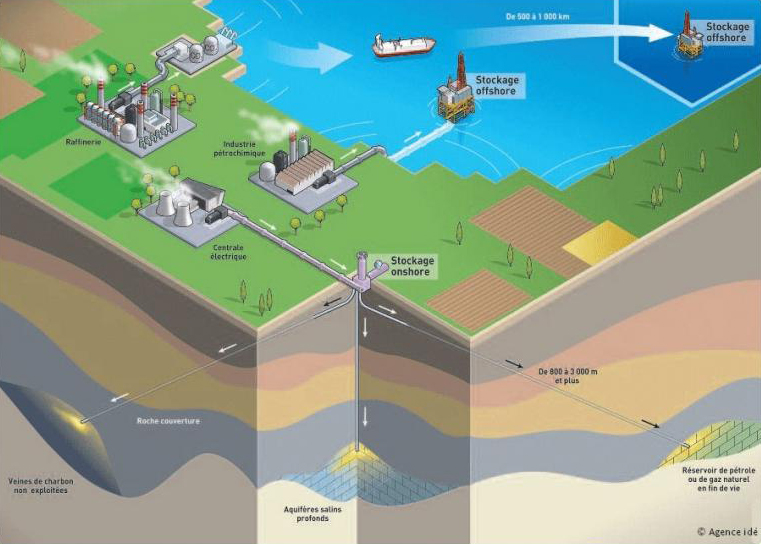 CO2 is separated from other gases produced by the use of fossil fuels during the production of power and other industrial processes. Only the CO2 from industrial smokes (power plants, petrochemical industries, refineries…) that are emitted in large quantities can be trapped.

Once captured, CO2 is compressed and dehydrated in order to be transported to the geological storage site or the place where it will be « recycled » for new applications.

At the storage site, the captured CO2 is injected into deep underground rocks, often at - 800m or more from the ground surface, and this for hundreds or thousands of years. If it is destined for another use instead of being stored, it could be utilized for industrial, chemical or biological applications.

CCUS could help capture 90% of the major world CO2 emitters

CCUS is estimated to have the potential to contribute by 19% to global GHG mitigation by 2050. However, several obstacles remain to be overcome in order for the technology to spread: mastering all environmental and health risks, and ensuring its financial and social feasibility to start with

Caption: Example of capture in a power plant. CO2 capture necessitates extra power, which itself generates CO2. Consequently, avoided CO2 emissions are calculated comparing a generic power plant with one that is CCUS-equipped (therefore consuming more energy). Because of this process, the amount of CO2 that is captured is always greater than the avoided CO2. 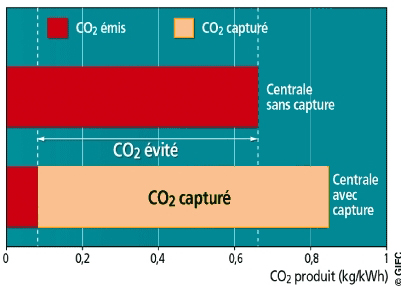