Some industrials processes necessitate CO2 taken from natural gas fields. The alternative is to reuse CO2 captured from industrial smokes instead of extracting it from the ground. 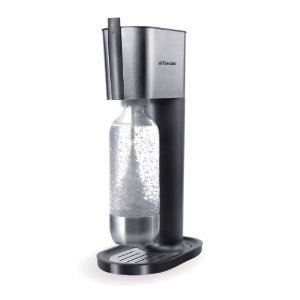 Numerous applications are already commercialized, among which the most classics are: fizzy drinks, food processing (frozen products and refrigerated vans), water treatment, welding and cleaning. For the gasification of drinks and food processing, a very pure CO2 is used, which is not achievable via all capturing processes.

Other niche applications also exist: CO2 can be used in its supercritical state to produce cosmetics, drugs or electronics.

Caption: CO2 can be used for gasifying drinks

The oil industry has already been injecting CO2 into oilfields to enhance hydrocarbon recovery for several decades now. It now has significant experience in exploiting fields of natural CO2, manipulating the gas, transporting and injecting it underground. The techniques implemented since the 1950s have permitted to double the amount of oil recovered from the fields.

In some cases, CO2 injection is coupled with a storage process in the oilfield; however, most of the times the major part of the injected CO2 returns to the atmosphere. The main environmental interest of CO2-EOR lies in the fact that the CO2 that is used has been captured from industrial smokes instead of extracted from natural fields.

How does it work ?

The CO2 injected maintains the reservoir pressure and, by dissolving into the oil, makes it less viscous and eases it out to the production well. Thanks to the progress made these last years, between 30 and 60% of the original oilfield can be recovered – the technique is called Enhanced Oil Recovery (EOR).

The potential for CO2 storage associated to EOR is noteworthy: about 60% of the injected CO2 is kept trapped inside the reservoir. Yet, part of the CO2 always ends up reaching the surface in a mixture of oil, water and gas. After the oil has been treated and the CO2 separated, it could be captured again to be re-injected and stopped from returning into the air.

Up till now, the CO2 that was used for EOR came for the most part from natural CO2 fields, and only 1/5 originated from the capture of industrial emissions. Yet the EOR solution should develop in the years to come, as it helps side-stepping – at least partially – the fluctuation of CO2 prices and its supply.

There are only a few CO2-EOR projects from captured CO2, and those are at a preliminary stage. They are mainly located in North America: Alberta Carbon trunk Line in Canada and the seven other projects are in the United States.

Finally, about thirty other EOR projects from captured CO2 exist at a less advanced stage – mainly in the USA and China – with only one project in Europe (The Netherlands): Green Hydrogen project (capture from a hydrogen production unit by Air Liquide), expected to start in 2016.

Since September 2000, an EOR operation by CO2 injection has been running under the control of EnCana in Weyburn oilfield (Saskatchewan, Canada), and in January 2001 an international research program was launched by the IEA, called “IEA Weyburn CO2 monitoring and Storage Project”. 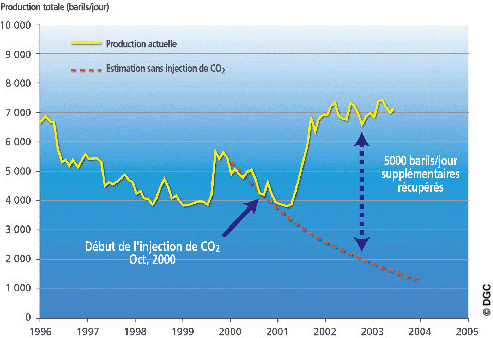 Caption: The diagram shows the increase in oil production at Weyburn since CO2 was injected in October 2000.

The CO2 comes from a coal gasifying unit located in North Dakota, USA. It is carried to Weyburn via a 330km-long cross-border pipeline built specifically for that purpose. The objective is to inject 1.8Mton of CO2 per year for 15 years, which amounts to a total of 20 million tons of CO2 stored permanently and 130 extra million barrels of oil produced