What is an aquifer ?

Sedimentary basins are areas where mineral or organic particles collected and solidified. The process of sedimentation can last for tens of million years, creating several layers, each varying from the conditions at the time of sedimentation. Some of these layers – aquifers – are made of porous and permeable rocks charged with water. The top part of aquifers is often used as a source of drinking water, whereas deeper underground the salinity that is found exceeds that of sea water, which makes it unfit for drinking. 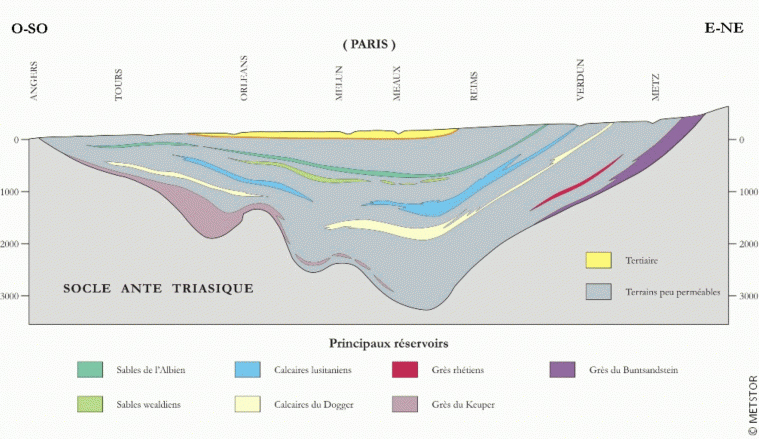 The Paris basin spreads from East of Brittany to Alsace and is 200 million years old. It is particularly fit for CO2 storage as it is made of numerous layers of aquifers.

Of all types of reservoirs that are considered for storage, deep saline aquifers are the ones that present the most storage capacity (400 to 10 000 CO2 Gton). Albeit widely spread around the globe, their structure and potential to permanently trap CO2 remains very hard to assess; therefore a significant research effort must be undertaken to bring answers on their long-term potential for the prospects of CCUS.

A first experience started in 1996 with a million tons of CO2 per year being injected into a deep aquifer. It is the first industrial mission of CO2 geological storage with environmental intent – to fight climate change.

The CO2 comes from the natural gas field of Sleipner located in the North Sea at about 200km off the Norwegian coast and run since 1996 by Statoil. The natural gas, mainly made of methane, also contains 4 to 10% of CO2, a rate that must be cut down to 2.5% in order to respect the trade standards. This procedure of reduction takes place offshore.

The extracted CO2 is directly injected into the largest local saline aquifer, about 1 000 meters deep under the seabed, in the Utsira sand formation. Every year, a million tons of CO2 is buried in the oceanic substratum instead of being rejected to atmosphere as it usually is the case. The injection fees are offset by the Norwegian tax on offshore CO2 emissions.

Caption: First world CO2 storage site in deep saline aquifer in Sleipner, North Sea (Norway). Natural gas is extracted 2 500m deep from the drilling platform and separated from the CO2 it contains on the gas processing platform. The CO2 is then injected into the sand aquifer of Utsira, 1 000m deep. 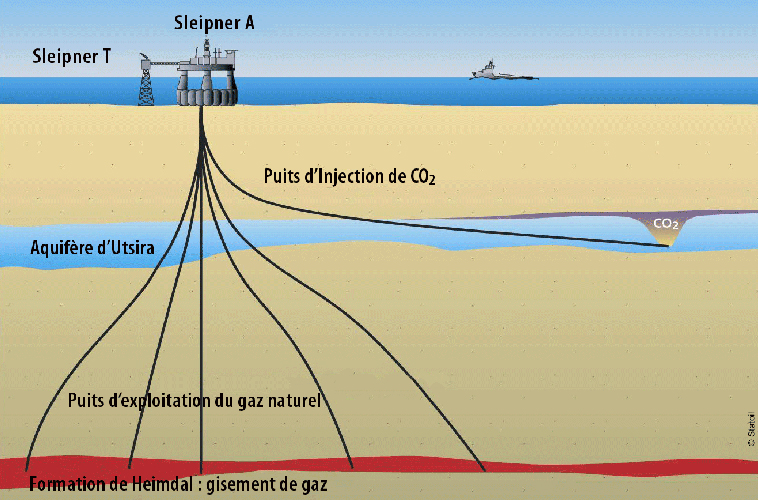 In Salah is a natural gas field run by BP, Sonatrach and Statoil. CO2 is separated from the produced gas and injected into a deeper part of the geological layer where the gas comes from – an aquifer which is estimated to hold a storage capacity of 17 million tons of CO2. Since August 2004, more than three million tons of CO2 have been injected. The project was not devised for financial reasons but to study CCUS and perfect the skills of manufacturers for future large-scale operations.

Caption: In Salah, subsidiary of Sonatrach, BP and Statoil, developed the infrastructures to extract CO2 contained in natural gas (from 1 to 9%) and store it in the gas field. 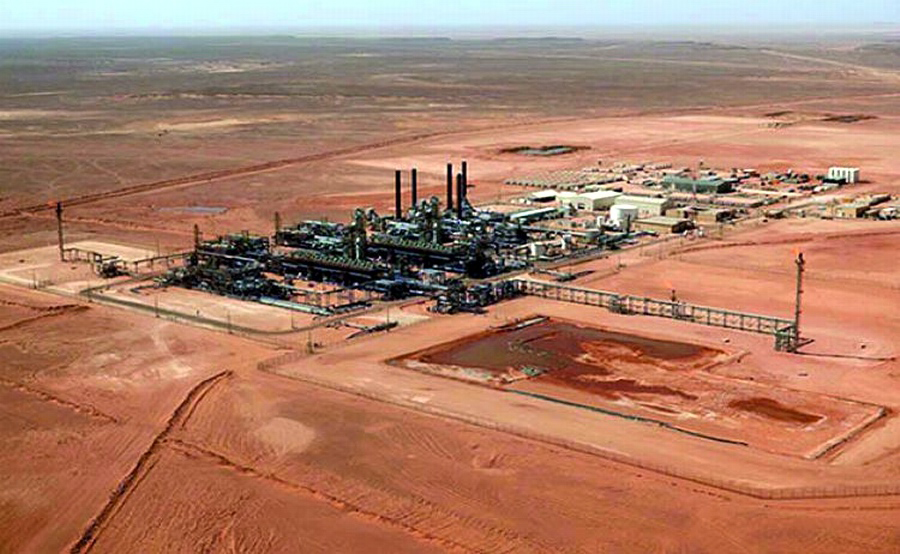 A CCUS pilot installation was developed within the framework of European project CO2SINK, launched in 2004. Since the end of June 2008, some CO2 has been injected regularly into a saline aquifer located about 800m deep. The aim of the project is study the behavior of CO2 in real underground conditions, specifically with connecting minerals. The observations will also help improve the digital models used for scientific simulations. By the end of 2011, near 60 000 tons of CO2 had been injected in the Ketzin site (CO2SINK).

This gas field, exploited by Statoil since the end of 2007, contains very large quantities of CO2. As the gas is destined to be liquefied, the extraction of CO2 takes place onshore in Hammerfect, about 160km from the production platform. The CO2 is then conveyed by pipeline to the storage site, located near the production platform. About 700 000 tons of CO2 are estimated to be injected each year in a geological formation about 2 600m deep under the gas reservoir.