How to capture CO2 ?

Prerequisite: separate CO2 from the other gases that make up industrial smokes

The CO2 released by factories is often very little concentrated. It usually represents less than 20% of the volume of the smokes, composed among other things of oxygen, water steam or nitrogen. The aim is not to store the smokes in their entirety (the associated costs and the volume of storage that would be needed are not realistic), therefore separation methods are necessary to capture CO2 specifically. 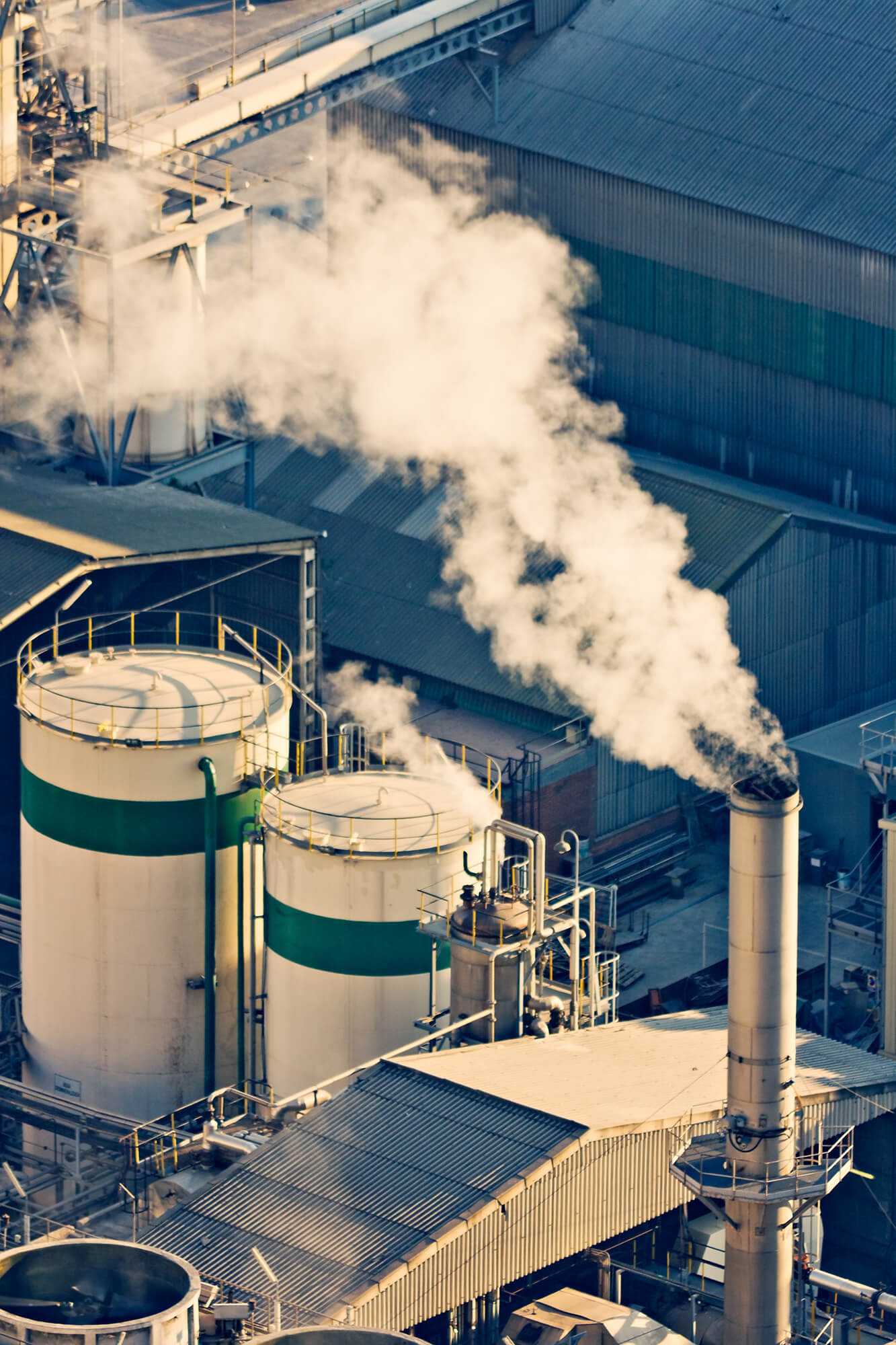 This system can be integrated to existing installations without involving too many important modifications. Absorption is the method most used in this type of capture. 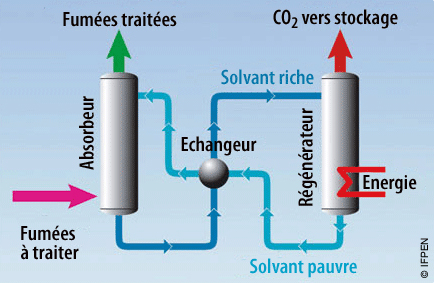 The CO2 contained in smokes is extracted by a chemical solvent, which is then regenerated via an energetic supply. Thus the CO2 is separated from the solvent, and the impoverished solvent is redirected to the absorber.

the capturing process most used is via chemical solvent such as amines, ionic fluids, refrigerated ammonia…

Capture by Adsorption: the CO2 contained in smokes is adsorbed on porous rock of active coal type, regenerated by energetic supply or pressure drop..

Capture by calcium cycle: consists in trapping CO2 with Quicklime to change it into limestone. The limestone is then heated, which frees the CO2 and leaves out quicklime again.

Cryogenic capture (also called Antisublimation): this process is based on solidification of CO2 by frosting and defrosting.

Capture by membrane separation: the CO2 has to be physically separated from the other smoke components via a selective porous membrane.

This system is not technically speaking capture. The issue here is at the input and not the output of the process – producing smokes that are 95% concentrated in CO2, via pure oxygen combustion. 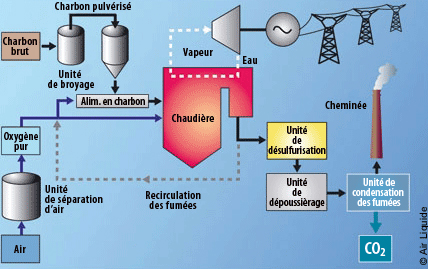 The shift to oxycombustion requires the existing installation to be reconfigured (retrofit). The oxygen separation from air, mainly obtained cryogenically, is very expensive and energy consuming. The energy consumed for bringing pure oxygen to a coal plant of 500MW producing 8 000 hours per year would represent 15% of its electrical annual production.

In order to avoid the cost of separating the oxygen from air, a promising technology is considered: chemical looping combustion (CLC) – the oxygen is fixed on a metallic base, then used during combustion to consume fuel by oxydo-reduction.

The technology is currently at a research stage and will only be used on new installations.

Fuel is converted in Synthetic gas at the input – a mix of carbon monoxide (CO) and hydrogen (H2). The technique that is used is either Steam reforming of natural gas with water, or part oxidation with oxygen. The CO found in the mix reacts with water during the conversion stage to form CO2 and hydrogen. The CO2 is separated from hydrogen by absorption with a physical solvent or a chemical solvent in the process used for combustion capture. Hydrogen can be used to produce energy (power and/or heat) without emitting more CO2.

Does the capturing method affect the purity of CO2?

Depending on fuel type or capturing method, some impurities can remain in the gas to compress:


If capture is done by postcombustion, the CO2 can contain nitrogen and sulfur oxides

With oxycombustion, there is oxygen and nitrogen left


In precombustion, some hydrogen and natural gas come with the CO2

Other impurities, such as traces of hydrocarbon or solvents, can also disrupt the behavior of the fluid. On average, the CO2 captured is 95 to 99% pure.

What challenges for the future?

Today, the main axis for progress that has been identified to allow the development of capturing technologies is cost reduction. CO2 capture results in a significant overconsumption of energy, which consequently hinders productivity of installations and greatly increases the cost of the energy thus made.

Each technique must also improve its own specific performances:

Postcombustion: improvement of the separating agents’ performance (solvents, membranes) in terms of stability, selectivity and capacity of regeneration